Andorra is a small country, boasting lovely mountain scenery, which is often overlooked on travel itineraries. But despite its size, Andorra is well-known as a winter destination in Europe for its superb ski hills, while popular things to do in summer include hiking and mountain biking. Made up of several small towns and villages tucked between tall mountain peaks, Andorra lies just three hours' drive from Barcelona to the south and Toulouse to the north, making it an ideal day trip if you're pressed for time.

It is Europe’s largest spa complex with a glass-pyramid shaped building situated in the capital, established in 1994.

It has several facilities numerous lagoons (both indoor and outdoor), many saunas and Jacuzzis, as well as its specialized spa areas featuring Indo-Roman baths, cascades, warm marble slates, and even a grapefruit pool.

Due to its use of the mineral-rich warm waters that emerge from the city's thermal source, a visit to this unique spa complex is one of those once-in-a-lifetime experiences that is not soon forgotten.

Sant Joan de Caselles Church is Considered one of the country's finest Romanesque churches dates back to 11th century.

It built entirely from stone and wood, with some amazing pictorial interior,most notably its fine interior decorated with excellent frescoes, dating from 1525.

It is situated in the small village of Canillo, it is registered as a heritage property in the Cultural Heritage of Andorra.

The entrance is free, and all the visitors are offered to use free parking for the first 2 hours of their visit.

It is a heritage property registered in the Cultural Heritage of Andorra.

It was built originally in the 11th-12th century and rebuilt in the 17th century.

The Museum of Miniatures

The Museum of Miniatures (Museo de la Miniatura) located in Ordino is a great way for young and adults to spend an hour there.

These miniature artworks are crafted by Nicolai Siadristy, a Ukranian artist who's widely regarded as the best in his field, these tiny masterpieces are so small that they have to be viewed through a magnifying glass or microscope to be appreciated.

Crafted from metals such as gold and platinum, as well as everyday materials including paper and wood - even grains of rice - the museum's huge micro-miniature collection features everything from minuscule Russian Dolls to religious artifacts including crucifixes.

The exhibits are augmented by an interesting audio-visual display, which also features details of the artist's life and craft. 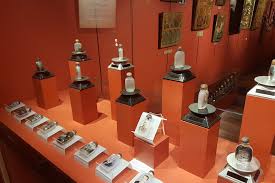 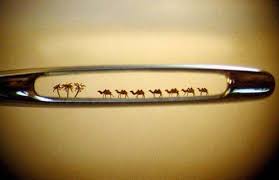 Soldeu ski resort is located in the heart of the Pyrenees.

It is one of Andorra’s best ski resorts, set on a steep slope and overlooking a wide valley.

It’s a well-organized skiing village which has everything a ski lover needs – slopes, lifts, ski schools with group and private lessons, etc.

After finishing skiing there are additional ski activities and locations to choose from sports bars, pubs, restaurants, clubs and shopping areas.

The resort is also home to the Sport Wellness Spa for relaxing the muscles after a day on the slopes. 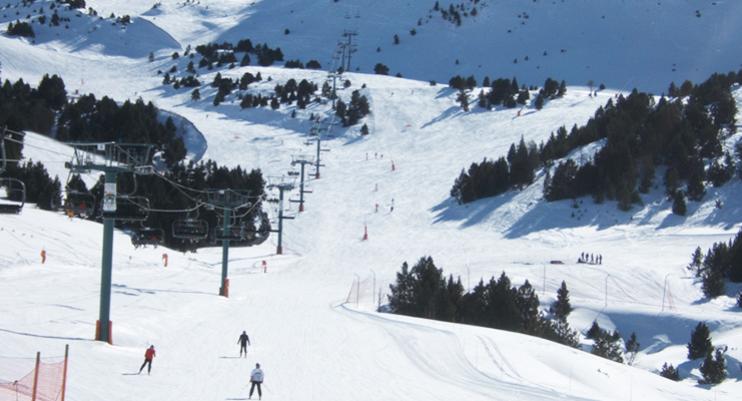 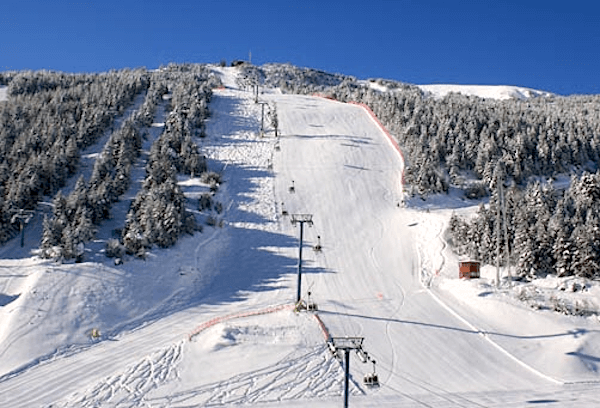 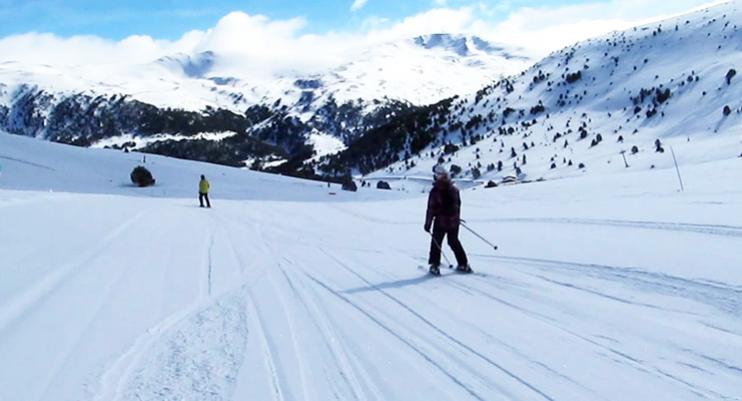 Located in the village of Encamp.

It is one of the most important automobile collections in Europe.

The museum displays classic vintage cars along with antique motorcycles and bicycles, all in a good condition.

Santa Coloma Church is the oldest church in the country.

It is one of the country's finest Romanesque places of worship,

This splendid old stone structure dates from the 9th century and contains a valued 12th-century statue of the Virgin of Coloma, a number of Mozarabic frescoes on its arched entrance, and a splendid medieval font. 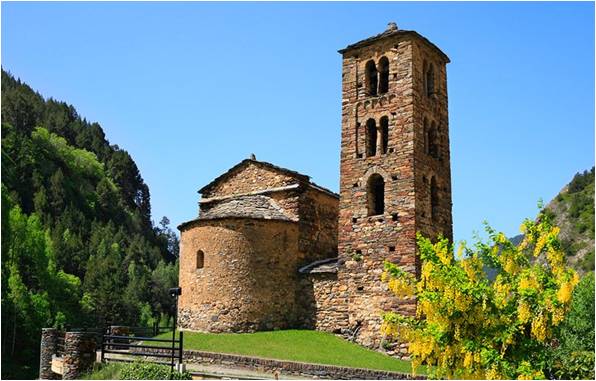 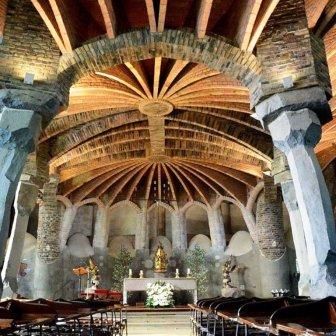 The largest Natural Park in Andorra, Madriu-Perafita-Claror covers 10% of the whole country of Andorra and was declared a UNESCO World Heritage Site in 2004.

Bisected by a large river valley, it is home to many different species of flora and fauna.

The Museum can be found next to the church of Santa Eulàlia in the village of Encamp.

It’s filled with all kinds of artworks, from gold and silver work to textiles and paintings, collected from churches across the country; two of the highlights are a Baroque wrought-iron chandelier and a 14th-century bronze censer.

The place is open only in July and August.

Lake Engolasters is a fascinating tourist spot in Andorra.

It is formed due to a glacial depression.

The valley provides an enchanting view with green meadows and rich forest of pine trees nearer to the lake border. 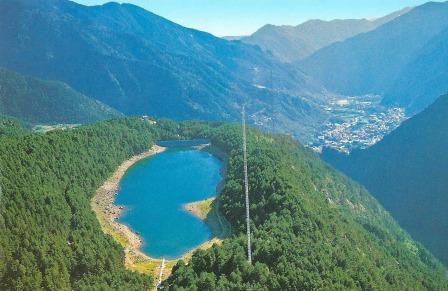 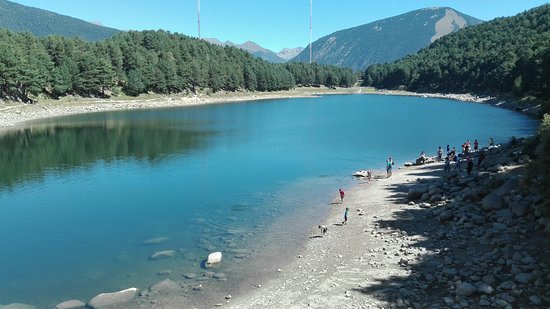 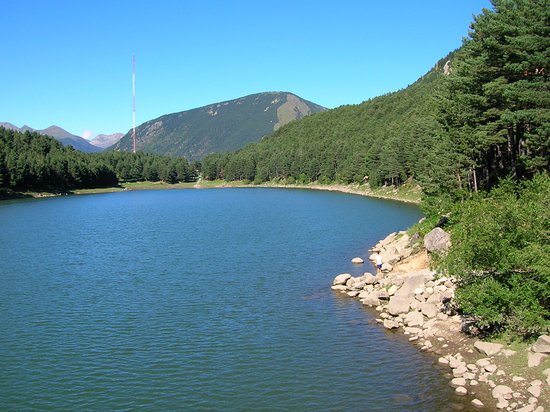 La Mina de Llorts, a unique iron mine dating back to the 19th century which is now transformed into a popular tourist spot.

Enjoy traveling through the old tunnels of this mine exploring its various aspects.

You will see also other monuments such as the sculptures of the Ironmen, the Church of Sant Martí de la Cortinada and the former road of the arrieros.

Vallnord is quite popular for being an amazing ski resort present in the spectacular Pyrenees Mountains.

It offers a 93 kilometers slope for skiers around the globe, two ski resorts Pal Arinsal and Ordino Arcalis merged to form the Vallnord.

Skiers all over the world go there to enjoy the fun of skiing and tourism in one place, it is specially designed to welcome families with children and offers a few delightful family activities

If you visit it in summer, you can enjoy hiking, thrilling mountain-biking, and climbing. You can also go for a gondola lift.

In winter, you can enjoy snowboarding and fun-filled skiing. 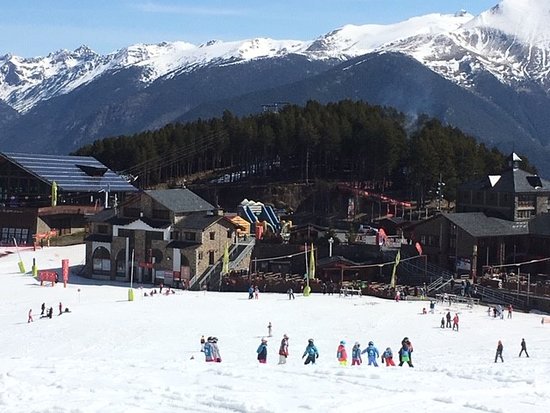 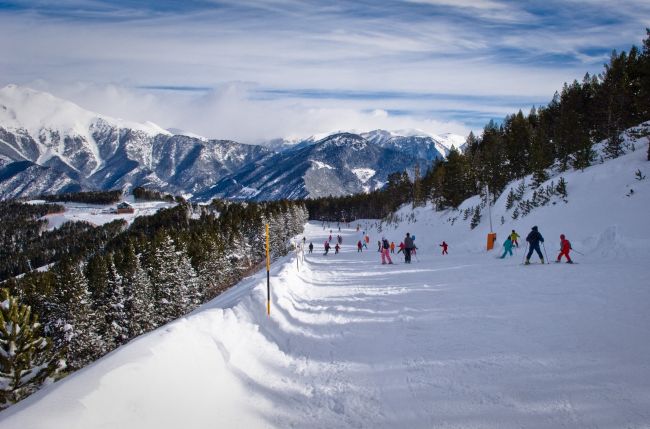 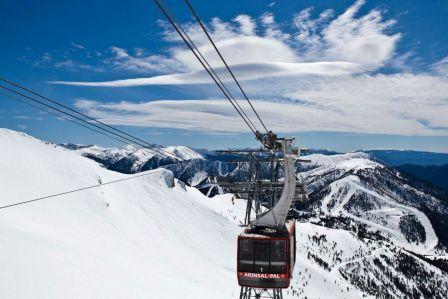 This is an epic viewpoint, which consists of the 20-meter-long walkway, 8 of them on solid ground and the other 12 in the scenery itself.

The last 12 meters are part of a platform which is suspended in the middle of the air and brings the sensation of flying over the magnificent Pyrenees.

Part of it is made of transparent glass which will also boost your adrenaline.

The location is free and open for all, all through the year.

This small church is located in the old city of the capital – Andorra la Vella.

It dates back to 12th-century the church has some impressive sculptures, a bell tower, and an apse.

The entrance is free of charge and available throughout the year.

La Noblesse du Temps or The nobility of time is a monumental bronze sculpture, which is weighing 1,400 kilograms and is rising to 4.90 meters above the ground.

It's made by the legendary artist Salvador Dali, and it symbolizes the passing time, which dominates over humanity.

Keep in mind that you’ll most probably have to wait in line for a while before being able to come close enough to take a picture.

Our Lady of Meritxell

Our Lady of Meritxell is an Andorran Roman Catholic statue describe an apparition of the Virgin Mary.

The original statue dated from the late 12th century.

However, the chapel in which it was housed burned down on September 8, 1972, and the statue was destroyed.

A replica can be found in the new Meritxell Basilica, designed in 1976 by Ricardo Bofill. 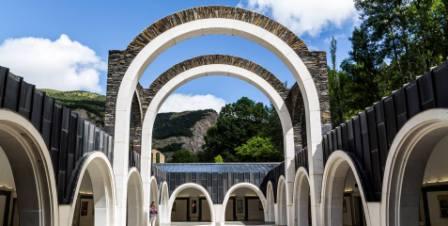 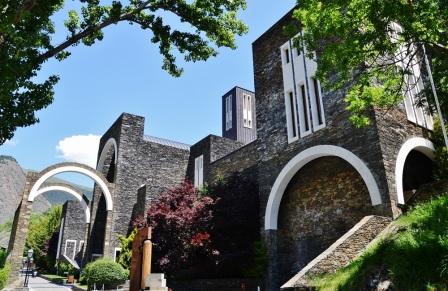 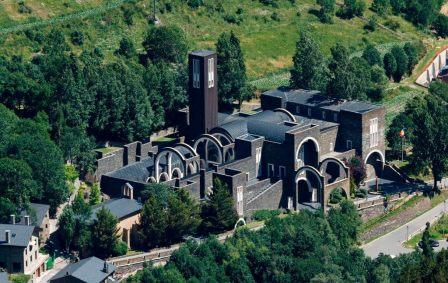 It may be surprising to learn that Andorra is home to a Tobacco Museum (Museu del Tabac), but in fact, tobacco was one of the country’s main sources of income before tourism and winter sports took over.

Housed in an old tobacco factory, the museum details the role of tobacco in Andorra’s economy and as well as how cigarettes are made. 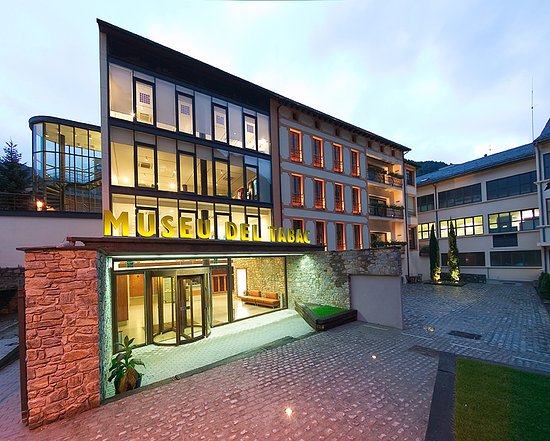 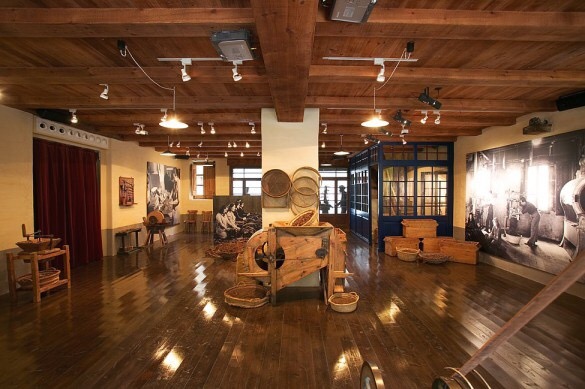 One of the most unique museums in Andorra is the Perfume Museum (Museu del Perfum), where visits can enjoy a whole sensory experience.

Hundreds of types of perfume are on display here as well as audiovisual exhibits and a detailed history of perfume through the ages.

One of the best parts of the museum is the Olfactory Room, where visitors can even create their own perfume by mixing different scents.

The cost of the ticket is 5 euro; group excursion (more than 10 persons)—3 euro. Children under 12 years-old and retired people—free. 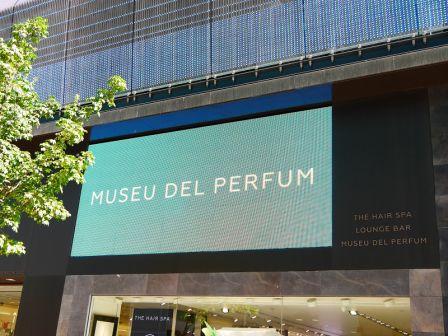 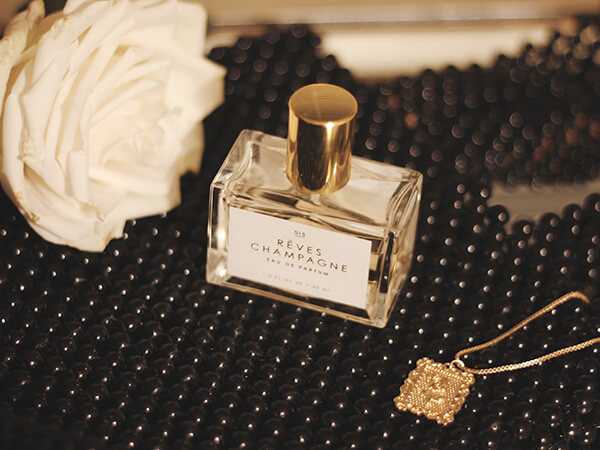 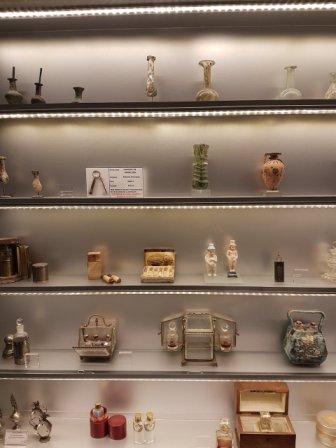 One of the most important monuments in Andorra, Casa de la Vall, located in the capital of Andorra la Vella, was built in the 16th century for the Busquets family.

Inside, visitors can see the assembly room, meeting rooms and even the criminal court.

It is a heritage property registered in the Cultural Heritage of Andorra.

It was built in 1633 for the family of Don Guillem d’Areny-Plandolit, a wealthy Andorran and prominent figure in the country’s history. Today, visitors can tour the property to see luxury items and pieces of furniture that once belonged to the family. 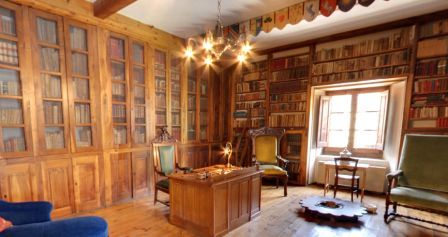 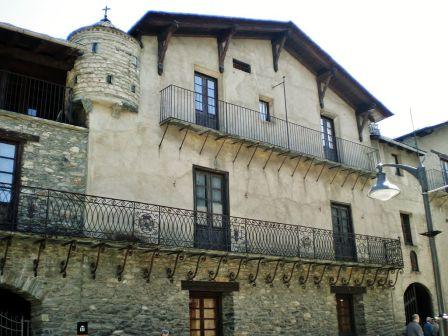 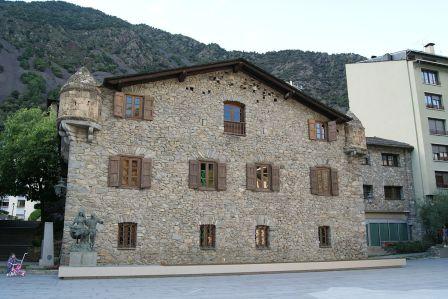 The new Carmen Thyssen Museum in Andorra is a historic listed building that is one of the best examples of granite architecture in Andorra.

The art gallery centered around a large private collection including works by 19th- and 20th-century Masters such as Monet, Matisse, and Gauguin (the country's newest major attraction also offers visiting exhibits).

With an area of over 210 kilometers of alpine ski slopes, Grandvalira Ski Resort is indeed a great place to visit.

It is quite the charming ski resort being made up of six other different ski resorts including, El Tarter, Canillo, Soldeu, Encamp, Grau Roig, and Pas de la Casa.

It is also said to be the most significant skiing resort in Southern Europe.

Grandvalira is situated between Les Escaldes and La Vella; this ski station also provides people with the opportunity of other activities like scuba-diving.

The Best Places To visit in United Kingdom

Where to go in UAE

Where to go in Egypt